“I specialise in paediatric interventional radiology, which involves using image-guided keyhole surgery and other minimally-invasive procedures to diagnose and treat a wide variety of conditions in children. Interventional radiology is very new in the paediatric medical world and I’m passionate about being at the forefront of this evolving specialty. I have a special interest in working with children who have complex birthmarks or vascular malformations, where these techniques can make a real difference.”

Born and raised in Zimbabwe, Alex Barnacle came to England in 1984 and completed her high school education at Hereford Cathedral School before studying a degree in medicine at Southampton University.

She graduated in 1993 and became a Member of the Royal College of Physicians (Paediatrics) in 1998.

She trained in Radiology at Hammersmith and Charing Cross Hospitals from 1999 and was made a Fellow of the Royal College of Radiologists in 2003. She went on to complete specialist fellowship posts in paediatric radiology at Great Ormond Street Hospital for Children in London and The Royal Children’s Hospital in Melbourne, Australia. 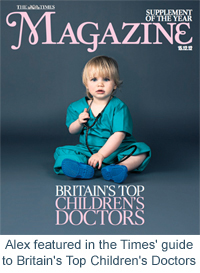 She was appointed as a full time consultant in paediatric interventional radiology (IR) at Great Ormond Street Hospital (GOSH) in 2006. She works as one of a team of six consultants in one of the leading paediatric IR departments in the world, offering emergency and planned treatment for children with a very wide variety of conditions. She is the lead radiologist for the vascular anomalies service at GOSH and runs the only dedicated paediatric orbital sclerotherapy service in Europe. In 2016, she introduced cryoablation as a new procedure for the treatment of musculoskeletal conditions at GOSH, the first paediatric cryoablation service in the UK. Her other specialist interests include the management of paediatric renal stones, thrombolysis and musculoskeletal interventions in children.

In 2017, she was invited to Sri Lanka to give a workshop on the treatment of vascular anomalies. This was generously funded by the charity British Foundation for International Reconstructive Surgery & Training (BFIRST) and a bursary from the British Society of Paediatric Radiology (BSPR). It was a hugely stimulating and challenging week, spent seeing families in clinic and operating on children at Lady Ridgeway Hospital and the National Hospital in Colombo, teaching local specialists new diagnostic and operative techniques. The success of the workshop has led to an exciting ongoing collaboration with the radiology and surgery teams there to grow sclerotherapy and other paediatric services across Sri Lanka and will hopefully allow for a return visit in March next year.

Since 2015, Alex has sat on the board of the international Society of Pediatric Interventional Radiology (SPIR) and in 2017 was elected to the Executive Board as Treasurer. She is immensely proud to represent her speciality in this way and strives to bring a European perspective to the board as well as to use her position to push for the development of paediatric interventional radiology across Europe.  She is widely published on the subject of paediatric intervention and is invited to speak regularly at national and international scientific meetings.

Outside work, she is a keen runner and a very amateur waterskier, with interests in art, travel, gardens and books, as well as all things Spanish.